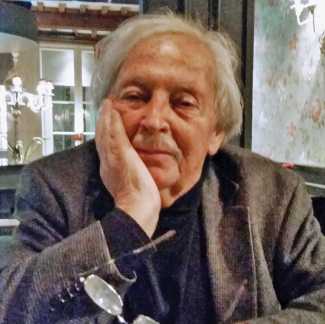 We shall be featuring his replies over this and the next two blog pieces, so stay tuned …

Was it the books in my father’s library that ‘spoiled’ me from a young age? Was it when my curiosity about the still-unknown world was quenched a little by an edition of the Sittengeschichte der Völker (The Moral History of the Human Race) in my father’s closet, with its many photographs of naked girls and women? This book, with its ‘beautiful Berber woman’ and ‘young Japanese woman’, gave me hours of secret pleasure. And among Balzac’s Droll Stories I found one in which a servant gives his mistress ‘a beautiful dream’ during her siesta, a dream that made me dream too. But secrecy was the order of the day, and prohibition the universal and unspoken rule.

At that time nudity could be also found in a more direct way – my sister lived in Sweden, and whenever I visited her I always needed to look into the kiosks that openly offered pornographic magazines. The visceral excitability of a young person tends to blind them to the more aesthetic aspects of erotica!

I grew up in what was becoming an increasingly liberalised society. Former taboos were being relaxed, and people were campaigning for readily-available contraception, same-sex love and youthful sexuality. I was involved in the student movement of 1968, which among other things demanded sexual freedom. That wasn’t without its consequences – at one demonstration against the Vietnam War, where I was wearing a suit and waistcoat even though it was summer, I met a woman who literally loosened my tie. That led to divorce and the end of my very conventional family life. I discovered that once you have enjoyed the boundless air of freedom, you can never return. Theodor Adorno and Herbert Marcuse wrote about alternative systems and lifestyles, but it was all too evident how difficult it is to turn utopias into reality. The struggle for sexual freedom was absorbed by capitalist exploitation, erotic desire for freedom was converted into consumer needs, the desire for happiness turned into the objects needed for a happy life. Consumerism dominated everything.

Still faithful to the idea of utopia, it became clear to me that happiness and freedom are the only things left that can’t be solved by consumerism. Art and imagination are where unlimited desire can still be expressed.

Which particular artists and artworks did you find especially important when you started your exploration?

As a student who had little money to spend on art, I discovered Heinrich von Sydow’s gallery in Frankfurt. I remember Sydow pulling a folder out from under the counter with a conspiratorial gesture – it was À Sade by Hans Bellmer. I was entranced by the precise, intellectual lines of this artist, which allowed him to explore deep human instincts. À Sade was my first important art purchase.

Over time I acquired other works, often quite torn between different styles and subjects. There were those that seemed threatening and destructive, others which were delightfully delicate. Which to choose? I tended to go for the lighter, more accessible works, even though I came to realise that there was often more truth hidden in the dark than in the sweet. Gradually a new criterion was added to my choices: what kind of truth about eroticism and sexuality is expressed in this work? I became wary of the purely beautiful: it could be hiding a lie. Now, in old age, I have more affinity with the darker works – Eros in conflict with Antheros. A keystone of my collection was to be Das gemeinsame Ziel (The Common Purpose) by Willi Geiger, made in 1905; I was fortunate enough to purchase the large original drawings for this work.

But there is an opposite end of the spectrum to the disciplined hand of Bellmer – the quick hand of Jules Pascin. There is no issue with the eroticism here; the lightness of the sensual moment dominates. Marcel Vertés also has such a light hand: where others need twenty strokes to sketch a scene, Vertés can do it with seven!

As I studied the works, I learned more and more about the art and the artists. The particular hallmark of a work became important, the vibration of a single line could excite me. I particularly discovered this kind of passion in the drawings of Leo Putz and Otto Rudolf Schatz.