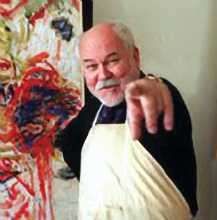 Adolf Frohner is one of the best-known Austrian painters, graphic artists and sculptors of his generation. After growing up in Grossinzersdorf in the far west of Austria, he moved to Vienna in 1952, where he attended the Fachschule für Wirtschaftswerbung (Academy for Business Advertising), and at the same time was a guest student at the Vienna Akademie der bildenden Künste (Academy of Fine Arts) under Herbert Boeckl. In addition to his work as a commercial artist, Frohner undertook his first self-taught attempts at painting, taking inspiration from Paul Cezanne, Pablo Picasso, Juan Gris, Fernand Léger, Oskar Schlemmer and Paul Klee.

Starting in 1961, Frohner worked as a freelance painter and illustrator, and thanks to a UNESCO scholarship he spent a year in Paris, where he met the Nouveaux Réalistes centred around Pierre Restany. In 1962, together with Otto Muehl and Hermann Nitsch, Frohner locked himself in a basement studio in the Perinetgasse in Vienna for three days – this was the birth of the short-lived Vienna Actionism movement, which emphasised the role of active involvement of the artist in their own work.

Starting in the mid-1960s, Frohner became interested in the way that advertising and ‘art photography’ influenced the way artists perceived and represented the human body, especially the casual sexualisation of women’s bodies. This exploration led to an extended series of paintings given the overall title Körperrituale (Body Rituals), and a set of paintings with the theme of ‘Still Life’, showing women’s body parts framed in the style of conventional still lifes.

During the course of his career Frohner was regularly commissioned for large public projects. In 1976 he painted two wall paintings for the UNO City international centre, and in 1995 a mural for Vienna Schwechat airport. In addition to his achievements as an artist, starting in the early 1970s Frohner pursued a highly successful academic career at the University of Applied Arts in Vienna. After being appointed emeritus professor at the Institute for Fine Arts, he headed the masterclass for painting there until 2005.

As a tribute to his work, the construction of the Forum Frohner in the former Stein Minorite Church in Krems, planned and designed in close collaboration with the artist, was started in 2006. It features Frohner’s own work as well as contemporary works by other Austrian and foreign artists. Frohner did not want a museum devoted to him, but rather a platform for vibrant discussion, for cultural, communal and social events as well as exhibitions. Tragically he did not live to see the opening of Forum Frohner in September 2007, having died suddenly and unexpectedly earlier that year. 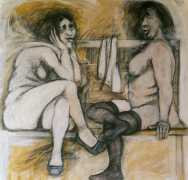 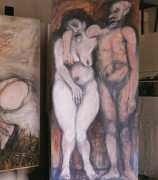 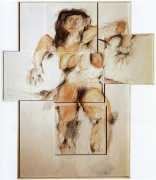 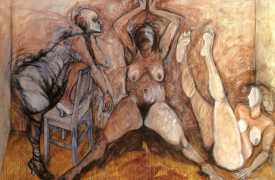