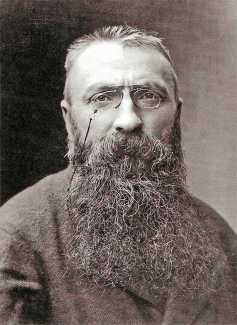 Auguste Rodin is best known as a sculptor, indeed as the progenitor of modern sculpture, his iconic works such as ‘The Thinker’ and ‘The Kiss’ being among the best-known of all twentieth-century works. Rodin possessed a unique ability to model a complex, turbulent structure in clay, and many of his most notable sculptures were roundly criticised during his lifetime. They clashed with predominant figurative sculpture traditions, in which works were mostly decorative and formulaic. Breaking entirely with that tradition, Rodin modelled the human body with realism, character and sheer physicality.

Here, however, we are more interested in Rodin as an illustrator and artist on paper, though his approach to these media arose from precisely the same creative well as his sculptures.

As an illustrator, his two main achievements were the line and wash illustrations to an 1883 edition of Charles Baudelaire’s poetry collection Les fleurs du mal (The Flowers of Evil), a work Rodin greatly admired, and s set of simple colour illustratrations for Octave Mirbeau’s 1899 work Le jardin des supplices (The Torture Garden), which clearly resonated with Rodin’s sense of the complexity of the human condition. As a painter, mostly in ink, wash and watercolour, he produced some of the most sensitive and beautiful figure drawings of his or any time.

Given that Auguste Rodin’s work is all about relationship, especially that between artist, model, and the way in which human beings live in the real world, his own intimate relationships are often underplayed. He was constantly drawing, painting, and modelling the human (mostly the female human) figure, and worked with – and bedded – numerous models, but two of them, Rose Beuret and Camille Claudet, were by far the most significant, and neither relationship was an easy one. Rather than rewrite the outline of Rodin’s relationships with these two women, we have reproduced below the text of an excellent blog article by novelist and art critic Claudia Moscovici; if you would like to read it with pictures and references included, you will find it here.

It would not be an exaggeration to state that Rodin’s artistic career was shaped by women. They were his source of inspiration, his assistants, his models, his sexual and romantic partners, his best friends, his patrons of the arts and, sometimes, his jealous enemies.

His life-long partner, assistant and friend was Rose Beuret. She was a country girl, the daughter of a provincial family that owned a vineyard in Vecqueville, Champagne. He met her in Paris in 1864, when she was only eighteen years old. Perhaps largely due to Rose’s devotion and loyalty to the sculptor, they stayed together – in on and off relationship – for over fifty years. Like nearly all of Rodin’s romantic relationships, theirs was tumultuous. It began as a passionate love affair between model and artist. Rose had recently arrived in Paris to work as a seamstress, but she also did part-time work as an artists’ model. This is how she met Rodin. The art historian and biographer Ruth Butler cites one of their mutual friends’ (Judith Cladel, who would also become Rodin’s mistress) description of young Rose: ‘At age twenty Marie-Rose was more than just a pretty woman. Her traits were a bit boyish, she had brown eyes that blazed at the least sign of feeling. Her abundant mass of brown hair was curled and coiffed with splendid originality, and, as simple as she was, she liked to complete her costume with a large hat that she knew how to wear with considerable elan, composing herself in a manner which one would call un type.’

Taken with his fresh-faced new model, Rodin affectionately called Rose Beuret ‘Mignon’, and sculpted her beautiful face and open expression in a work bearing her pet name. Soon Rose became pregnant with their child, a boy they named after his father, Auguste. Although the baby inspired several of Rodin’s mother-and-child sculptures, unfortunately it didn’t inspire much paternal – or even maternal – love. As a child, Auguste was passed off to be raised by various relatives. Despite this fact, throughout his life, Auguste manifested a deep respect and devotion for his increasingly famous father.

Although Rose may have been too busy modeling and assisting Rodin with his sculptures to be an attentive mother, she did aspire to a normal family life. She wanted Rodin to marry her. But that was not part of his plans. Bourgeois marriage was viewed as a philistine institution by many French artists of his time. Yet for all intents and purposes Rose Beuret was his common law wife, his partner for life. They eventually married just a few days before her death, in 1917. By then it wasn’t to lead the normal middle-class life she had always wanted, but rather to guarantee that Rodin’s sculptures would pass to her, and then to the French state, in the event of him dying first. The state didn’t want to risk Rodin’s artwork becoming the contested property of his many other mistresses.

Despite the fact Rodin never fully committed to her, Rose Beuret remained staunchly loyal to him. Throughout the years, she was his helpmate and assistant, no matter how many other women – can-can girls, models, disciples, artists and wealthy society ladies – he cheated on her with. She was as jealous, however, as she was fiercely loyal. Rodin captures her dual emotions best not in a sculpture, but in a painting entitled ‘Rose Beuret’. As Ruth Butler aptly describes, ‘The girlish beauty of Mignon has been replaced by a seriousness and intensity. It shows in the eyes that dart quickly to the left and in the trembling lips. We recognize in a flash that quality of immediacy—of real presence. By all reports, whenever people met Beuret they were struck by the intensity of her nature, which showed itself most vividly in angry outbursts of jealousy’.

If Rose had any reason to be jealous of anyone, it was of Camille Claudel. Camille was Rodin’s model, muse and fellow sculptor for about fifteen years. The two women, while hardly in contact, each resented the central role played by the other in Rodin’s life. Rodin met Camille in 1882, when he substitute taught Boucher’s female students, while the latter, who had won the famous Prix-de-Rome, was on a one year trip to Italy. At the time, female artists were not accepted by the Ecole des Beaux-Arts. Women who wanted to paint or sculpt were obliged to take classes at the ateliers of established artists and learn from them as apprentices. Seventeen-year-old Camille left a lasting impression upon Rodin, both as a young woman and as a very talented artist in her own right. He fell passionately in love with her and as much as she assisted his artistic production – as his model, muse, sculptor’s assistant working on the hands and feet of Rodin’s sculptures, and as an insightful artist – he promoted her artistic career, even after their bitter breakup.

Above all, however, Camille inspired the sculptor’s passion, which showed through in his sculptures at the beginning of their liaison. Rodin created some of the most sensual and beautiful works of his life while entranced by Camille Claudel: ‘Crouching Woman’ (1881–2); ‘Je suis belle’ (1882); ‘The Kiss’ (1884) and ‘Eternal Springtime’ (early 1880s). As Camille was a jealous woman, she made him sign a pact (which he never honoured) that he would accept no other student or lover than Camille Claudel.

Camille was also inspired to create sculptures that can be seen as hymns to love: particularly ‘The Waltz’ (1889–1905). This spectacularly elegant sculpture was criticised by art critics as too sensual: particularly since it was executed by a female artist. One critic, Dayot, objected to the ‘pungent emphasis on tendering the reality of the two sexes, so surprisingly sensual in expression that it appears to exaggerate the nudity’. While Rodin’s and Camille’s artwork may have thrived, their passion began to wilt as she demanded more and more commitment from Rodin. No matter how devoted he may have been to Camille, Rodin couldn’t fulfil the one promise that mattered to her most: that he leave his partner, Rose Beuret. Camille became increasingly obsessed with that relationship, and her jealousy was reflected in her later art.

This would turn out to be a main reason for the eventual dissipation of the love affair between Rodin and Camille Claudel, as well as for her psychic disintegration into a state of paranoia. Overcome with suspicion and jealousy, Camille kept sketching and sculpting images of an old hag, whom she took to be Rose, and of an old couple who, try as they might, couldn’t separate, representing Rodin and Rose. In 1893, realising that Rodin would never leave Rose, Camille Claudel left him.

Contrary to her own feeling that Rodin strove to undermine her career after their breakup, on the contrary, for a long time he continued to support it. As Butler recounts, ‘Rodin did not withdraw his support from Claudel even when their personal relationship changed. He continued to hold the lease on 113 boulevard d’Italie and presumably pay the rent’.

Unfortunately, with the death of their passion Rodin’s career continued to rise while Claudel’s plummeted, and she began to suffer from paranoid delusions. By 1905 she became seriously mentally ill, destroying her sculptures in rages against Rodin, long after he had moved on from their relationship to other muses, other women. In 1913 Camille Claudel was confined by her mother and brother to the psychiatric hospital of Ville-Evard in Neuilly-sur-Marne, a beautiful location which she nonetheless regarded as a prison. She spent the rest of her life there, unhappy and abandoned, until her death in 1943 at the age of 78. 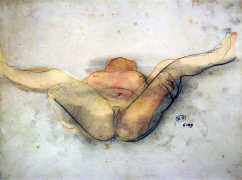 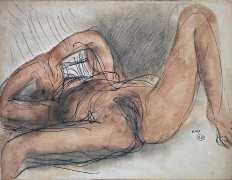 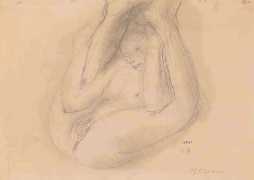 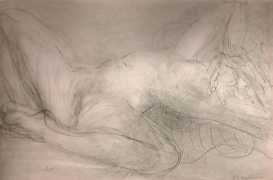 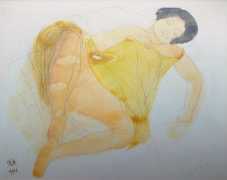 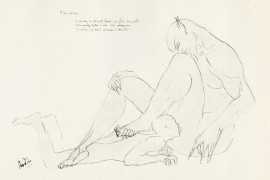 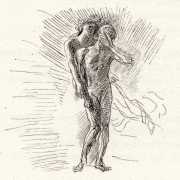 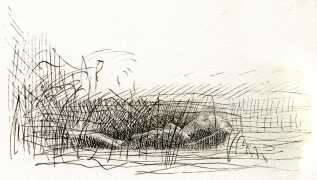 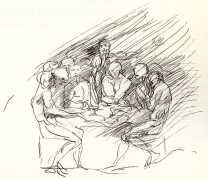 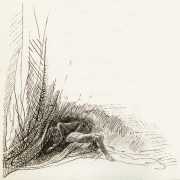 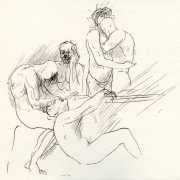 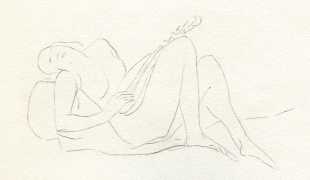 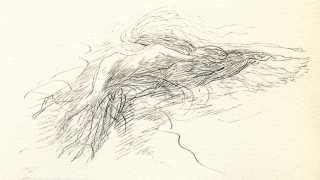 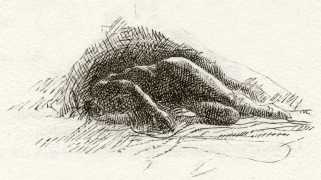 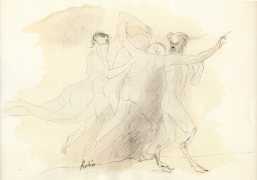 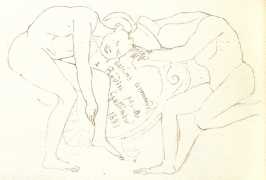 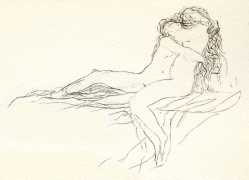 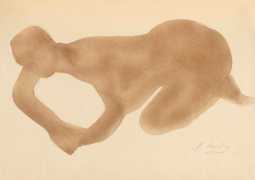 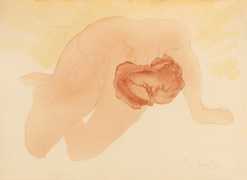 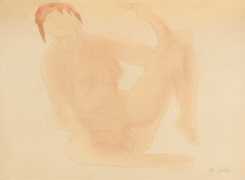 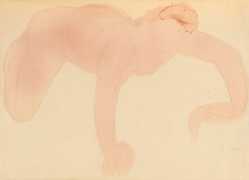