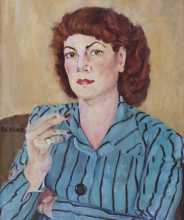 The German painter Charlotte Berend was the only woman to be admitted to the Berlin Secession group of influential painters working during the years leading up to the First World War. It may well have helped to be married to Lovis Corinth, a central figure in the movement, but it was not because she possessed any lack of talent as an artist.

Berend studied fine arts at the Königliche Kunstschule (Royal School of Art) in Berlin and at the Kunstgewerbemuseum (Decorative Arts Museum), taught by Eva Stort and Max Schäfer. In 1901 she was the first student at the private art school of Lovis Corinth, who fell in love with her. She became his model for a number of paintings, and in March 1903 she married Corinth and changed her name to Berend-Corinth. In October the same year their son Thomas Corinth was born, and their daughter Wilhelmine followed in June 1909.

Charlotte began exhibiting her paintings at the Secession in 1906. She joined the Secession in 1912, and did not leave it after the separation of the new Freie Secession led by Max Liebermann, when Lovis Corinth became its new leader. She drew book illustrations for Max Pallenberg, Fritzi Massary and and Valeska Gert, and painted portraits of Michael Bohnen, Werner Krauss, Paul Bildt and Paul Graetz. In the 1920s she supported young artists from the theatres in Berlin. In 1919 Lovis Corinth bought a house in Urfeld at Walchensee, where he and his wife could retire from their life in Berlin. Here in her lakeside home at Urfeld she painted mainly landscapes, portraits and still lifes.

Lovis Corinth died in 1925 from pneumonia during a journey to the Netherlands, and in 1933 Charlotte emigrated to the United States, where her son Thomas was already living in New York. In 1958 she compiled a catalogue raisonné of the complete paintings of Lovis Corinth, which became a standard work.