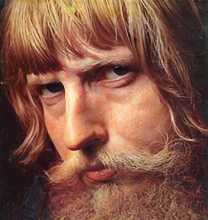 The German artist, sculptor and printmaker William Paul Eberhard Eggers was an important free spirit in experimental art between the 1960s and 90s, creating works exploring a mixture of Surrealism and Fantastic Realism to create imagined human shapes and magical landscapes. Many of his prints included naked and semi-naked bodies, often with the heads of mythical creatures.

Born in Hanover in the first year of World War II, Eggers grew up in the town of Linden north of Frankfurt. After the war his family returned to Hanover, where he was one of the first students to study at the Maschsee Waldorf School, newly-opened after the Nazis had banned Waldorf schools. He trained first as an industrial manager, but was fascinated by the processes of printmaking and sculpture, and studied privately with Fritz Junghans, Dieter Rudlof and Mac Zimmermann.

From 1959 Eggers worked as a freelance artist; he joined the Bund Bildender Künstler (Association of Visual Artists) and founded the Ricklingen Art Group. From 1960 to 1963 he worked as a lecturer at the Hanover Volkshochschule, in 1961 founded the art association and publishing house Araban 13, then in 1963 the Fischersträssner Presschen publishing house, where he produced hand-printed editions including Der Mensch ist einfach fabelhaft (Humans are Just Fabulous, 1963), Theatrum Anatomysticum (1963), and ll Calotto resscitato, oder das neueingerichtete Zwergenkabinett (Calotto Resuscitated, or the the Newly-established Dwarf Cabinet, 1964).

By the end of the 1960s Eberhard Eggers was exhibiting regularly in Germany and further afield, including Japan, Russia and the USA. From 1967 until the end of the 1980s he visited the USA regularly, including a visiting professorship at Stout State University in Wisconsin in 1971 and guest teaching in Hawaii and the University of South Dakota. In 1980 Eggers co-founded the Heitland Foundation with the entrepreneur Volker Heitland; based in Celle, the foundation is dedicated to supporting and encouraging young artists.

He was married to the artist Heike Eggers, and they had two daughters.