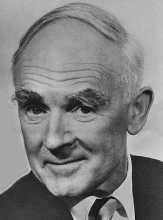 Edgar Parin d’Aulaire will be a familiar name to Americans of a certain generation, those who as children were avid readers in the 1940s, 50s and 60s. With his wife Ingri, he illustrated getting on for a hundred children’s books, including East of the Sun and West of the Moon, Norse Gods and Giants, and Greek Mythology.

Edgar Parin, originally of Swiss citizenship, was born in Munich to an Italian painter father and a French artist and musician mother. His parents separated when Edgar was six, and he grew up spending time with each, taking his mother’s family name. After studying architecture for a year in Munich, he began art studies at the Kunstgewerbeschule. A pupil of Hans Hofmann and Henri Matisse, he exhibited in Paris, Berlin and Oslo, and illustrated several books. Norwegian-born Ingri and Edgar met in Munich while Ingri was an art student there, and they were married in 1925. An insurance settlement following a bus accident in Paris provided the seed money for Edgar’s steerage-class passage to the US, where he secured enough commissions for Ingri to join him in 1929.

Their timing and talents were perfect for the burgeoning market for quality illustrated children’s books, especially as the talented couple were steeped in European history and legend. Their first collaboration was The Magic Rug in 1931, and their books, many based on Nordic myths, sold well and won several awards including the 1932 Newbery Medal and the 1940 Caldecott Medal.