If it were not primarily for the portfolio of illustrations he produced for the Deux-Rives edition of Prélude charnel in 1957, the background to which you can find in the Themes and Topics section, Édouard Chimot would probably not have appeared at all in this resource of talented illustrators of the erotic. There was a short period at the beginning of his career when he produced some original work, but by the mid-1930s he had become a sort of second-rate erotica factory, producing virtually the same set of illustrations for every book he worked on. Only in some of his last portfolios in the 1950s did he make the effort to produce more considered and original work again.

Chimot was born in Lille, and studied under Jean-Baptiste Levert and Alexis Mossa at the École des Arts décoratifs in Nice. He first exhibited in 1912, rather late at the age of 32 and close to the outbreak of the 1914–18 war, so he was already 39 before he made his mark on the Paris art world. He produced a series of etchings for René Baudu’s Les après-midi de Montmartre in 1919, followed the same year by what is probably his best and most original work illustrating Maurice Magre’s La montée aux enfers.

In the 1920s Chimot’s chief contribution to the art world was as artistic director of Les Éditions d’Art Devambez, where between 1924 and 1931 he oversaw the production of a wide range of literary texts illustrated by artists such as Pierre Brissaud, Edgar Chahine, Alméry Lobel-Riche, and Tsuguharu Foujita. Chimot reserved some texts for himself, including Les chansons de Bilitis by Pierre Louÿs (1925), La mort de Venise by Maurice Barrès (1926), Les belles de nuit by Maurice Magre (1927), and Paul Verlaine’s Parallèlement (1931).

By the early 1930s, however, the market for his particular style of characterless female nudes had virtually dried up; his 1932 attempt to classify current styles of women’s pubic hair in a series of fifteen lithographs, Les chats, was a particularly low point in his output.

Chimot had fallen in love with Spain while researching the illustrations for Pierre Louÿs’ La femme et le pantin in 1928, and during the Second World War he and his wife Loulou (nineteen years his junior) took refuge from the war in the holiday house they had bought in Barcelona. Hence Chimot’s publications afterwards, appeared in Barcelona, often illustrate Spanish-language texts.

For a few years in the early 1950s Édouard Chimot produced some illustration work which rose slightly above his run-of-the-mill soft pornography, including suites for Cleland’s Fanny Hill and Pierre Louÿs’ Trois filles de leur mère. He died in Paris in 1959. 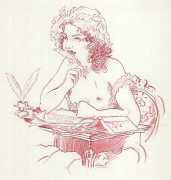 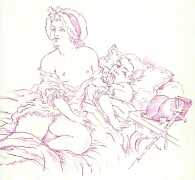 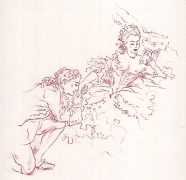 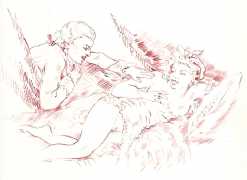 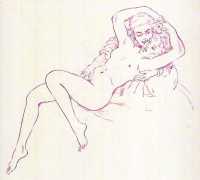 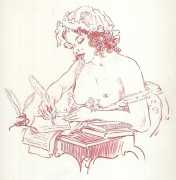 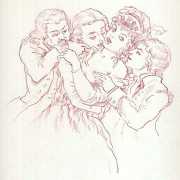 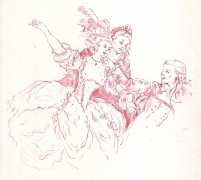 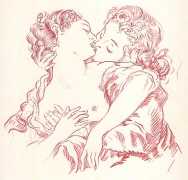 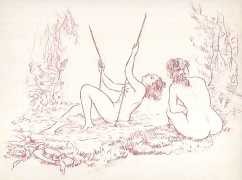