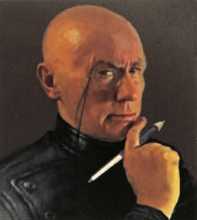 To many of those erotic comic afficionados whose formative years included the 1980s and 90s, ‘Erich von Götha’ will be best known as the master illustrator of classic story lines such as those of Milly Molly (in Men Only), Laura (in Torrid), and Janice (in the series The Troubles of Janice). Von Götha was portrayed (and liked to portray himself) as ‘The Baron’, with monocle, bald pate, cruel mouth, and a knowing twinkle in his eye, and has so often been portrayed in this role that the real artist, a man with singular and very genuine talent, has almost been painted out of the picture.

In fact Erich von Götha (sometimes Erich von Götha de la Rosière or Erich von Götha-Janssen) is the pseudonym of the English artist Robin Ray, born in Wimbledon in south-west London, who after wartime service in the RAF studied drawing and painting at St Martins Art School for four years from 1951. He began his career working for London advertising agencies as a designer, illustrator and copywriter, then worked as a teacher at Ealing School of Art.

Von Götha gained fame with The Troubles of Janice (1987–96), a sadomasochistic comic set in the late eighteenth century, during the heyday of the notorious Marquis de Sade. Loosely based on de Sade’s La philosophie dans le boudoir (Philosophy in the Bedroom), the tale follows Duke Viscount Vauxhall of Nether Wallop and his female sex slave Janice. The Janice series was made in close collaboration with the French campaigning writer, historian and collector Bernard Joubert.

The Twenty trilogy (2004–8) was a futuristic version of Janice, who now starred in a science fiction story set in the (then) faraway year of 2018. It follows the sexual adventures of an 18-year old girl, Twenty, at a special college for young girls, whose education will be finished in 2020 – the beginning of a new era of sex according to the author.

Von Götha has also worked as a book illustrator, producing artwork for a previously unpublished manuscript by Pierre Louÿs, Le sentiment de la famille, new illustrations for John Cleland’s Fanny Hill, and Journal de Sartine, set during the reign of French king Louis XV and based on the reports of Antoine de Sartine, Lieutenant General of the Paris police.

In the summer of 2014 the British Library included examples of Torrid in its exhibition ‘Comics Unmasked: Art and Anarchy in the UK’, curated by comic book historian Paul Gravett. Only English cartoons with progressive political significance were included, so it is interesting that von Götha’s work was considered to be within that ambit.

In 2016 the artist’s friend and co-conspirator Bernard Joubert wrote a biography about von Götha, Les carnets secrets d’Erich von Götha, published by Dynamite. The book provides many new facts and insights about the life and work of this deliberately-mysterious artist, and the many colour illustrations show the development of his style during a long and productive lifetime.