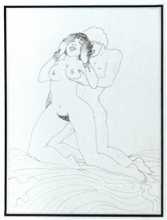 Gilbert Garnon, assuming such a person existed and is not a pseudonym, appears to have joined the French Resistance in 1943, and been married to either or both of Monique and Collette Garnon. What we know for sure is that a Gilbert Garnon was active during the second world war, and that (possibly the same) Gilbert Garnon was working in graphic arts and book production in the mid-1950s, when he was working as a consultant to a printing business in Bilbao, Spain. Whether this is the same Gilbert Garnon as the illustrator for a handful of erotic works published in the late 1970s and early 80s is less certain, but the name is not a common one, so let us assume that all three Gilbert Garnons are one and the same, an illustrator with a very distinctive style.

Garnon’s drawings are naive, bordering on crude, but he had a sure hand, a wry wit, and a fertile imagination. Nearly all his illustrations include a strong outline around the key elements, drawing the eye in to the subjects. 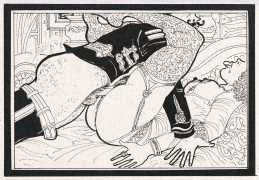 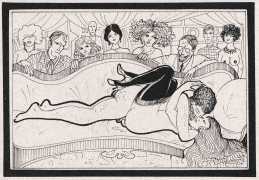 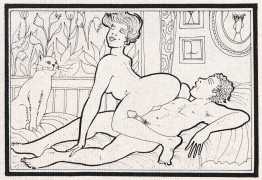 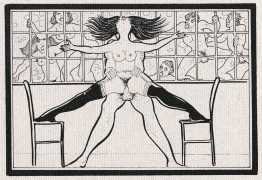