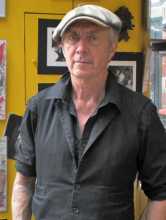 The French artist Hippolyte Romain grew up in Montmartre in Paris, and when very young he started work in a delicatessen. He was a naturally gifted draftsman, and soon began to sell his drawings in the streets of Montmartre where, discovered by an editor of Vanity Fair, he was commissioned to produce a series of illustrations of fashion shows in Milan. This was the beginning of a successful career as illustrator and artist, developing his own satirical style in the tradition of Honoré Daumier and Chas Laborde.

Romain has illustrated many books, and written himself on the subjects of fashion, travel and the art of living. He is an authority on the social history of France in the eighteenth century, and also spends part of each year in China. Together with a group of friends he founded a theatrical troupe called Le Petit Cirque Élégant (the Elegant Little Circus). His son, Yann Romain, is a fashion photographer who has collaborated with his father on a number of projects, including the travel book Tibet Style, a celebration of Tibetan culture.

For many French readers Hippolyte Romain is best known as the author of the 2017 book Au mieux 3 fois par semaine (At Best 3 Times a Week), describing his personal experience of divorce when his son was ten years old. As he writes ‘I became the father of a little boy at the age of seventeen. His mother and I stayed together for ten years, then we split up and my son came to live with me. During this separation I left everything, or almost everything. I left with two shirts, two spoons, two forks, and a silver cup for my son. We had to start a life together, starting from scratch. We lived in a small studio, where we slept in the same bed. Yann is now fifty-three years old, he is a photographer and lives in China.’ Romain’s book is a plea for understanding and communication, stressing the need for tolerance and cooperation, generosity and patience.

In a 2018 interview, Romain describes his experiences of becoming an artist:

I come from a really modest family, which I left early. Completely self-taught, I have always wanted to be an artist. At first I thought I was a writer. I especially wanted to write plays. But that doesn’t happen overnight when you’re seventeen and have a lot to sort out. So I did lots of jobs, and at the same time started to write little articles to take to newspapers as a freelance writer. But I realised that something more was needed to make them interesting, so I started to illustrate them with small drawings. My dream was to become a great reporter like in L’Illustration, but it was the heyday of photography and everyone laughed at me. I went to see the editorial offices of all the newspapers in France for many years, which at least taught me how the press worked. I tried to improve myself as I went along, but just continued to make everyone laugh. I still persisted, and went so far as to sell my drawings on the pavement, from May to October, every evening from Friday to Sunday, I hung my drawings on the gates of Saint-Germain-des-Prés. I saw a lot of people pass by and listened to a lot of things.
And then my little boy started reading comics. The big newspaper of the time was Pilote, and I went to see the editor-in-chief, Guy Vidal, with an illustrated piece on Saint-Germain-des-Prés. It consisted of a large watercolour in the style of Raoul Dufy, and a comic strip with text. It was not at all what Pilote had in mind, and Vidal said to me, ‘You know, we only do comics. But it’s still interesting. We’ll see.’ And then he published it! 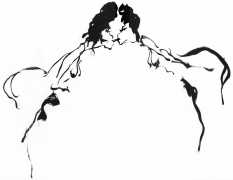 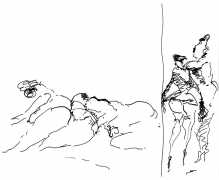 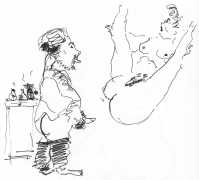 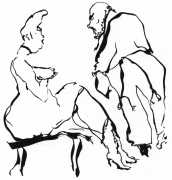 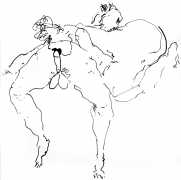 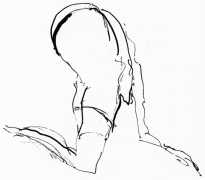 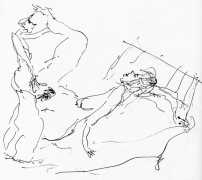 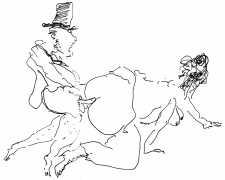 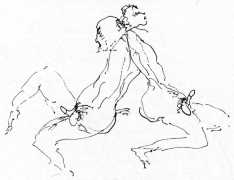 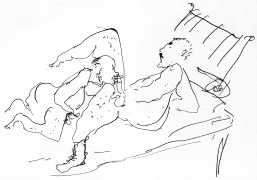 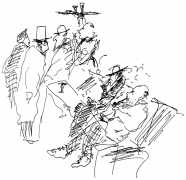 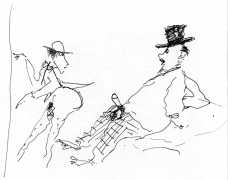 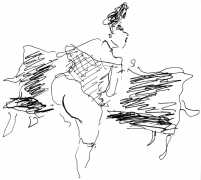 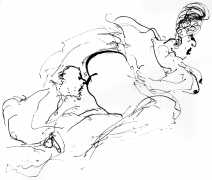 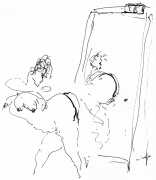 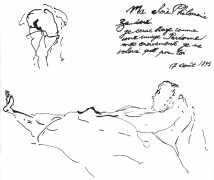 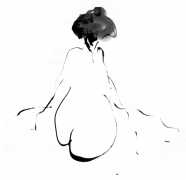 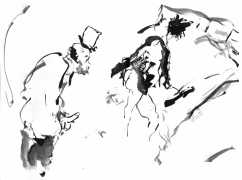 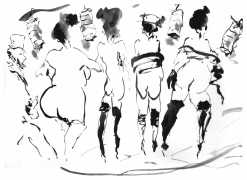 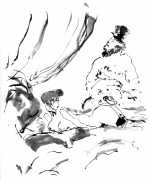 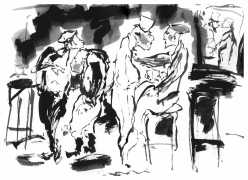 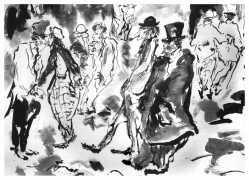