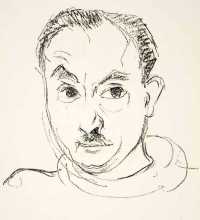 A pupil of illustrator and engraver Paul Renouard and caricaturist Louis Morin, he started his career in magazine illustration and advertising; it was a 1918 self-published album of sketches of his experiences as a prisoner-of-war in Salonika (Thessalonica) that launched his book illustration.