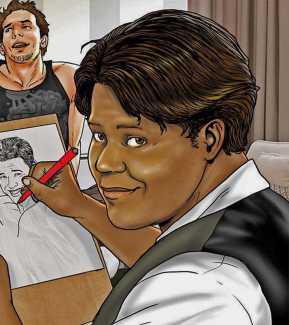 Anyone with even a passing interest in gay art will have encountered the work of Californian artist Joe Phillips. From the sensitive pencil drawings in The Joy of Gay Sex to his most recent Joeboys collections, he succeeds in capturing the rich variety of homosexual relationships in a way that normalises and celebrates the gay world.

Born and raised in Atlanta, Georgia, he attended Northside School of the Arts, and after graduating he spent time in Europe, taking part in various projects such as guerrilla street art. After returning to the United States, he worked on comic books, which is still his main and favourite style; he was one of the founding members of Gai-Jin Studios, a comic book studio whose past members include artists such as Adam Hughes and Brian Stelfreeze. In 2008 he worked on the Doctor Who comic book, and has worked for many comic book companies including Marvel, DC and Dark Horse.

It was while he was working on a Superboy comic, ‘Superboy and Risk: Double Shot‘, that he first sexualised his artwork and dropped hints about his homosexuality. Eriq Chang of the gay magazine XY offered Phillips a commission to draw a comic strip that would later become known as ‘Joe Boy’. In 2001 Joe Phillips released ‘Boys will be Boys’, a calendar featuring original gay-themed art, and in 2003 publisher Bruno Gmünder produced a book with the same title; Gmünder continues to be Phillips’ main book and calendar publisher.

In addition to comics, calendars and books, Joe Phillips has been instrumental in designing and producing clothing and gay-themed accessories, adult animation, music videos, album art, and advertising art. A vibrant and original force in gay art, he continues to be an inspiration and support for the rich world of gay creativity. 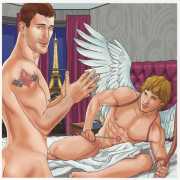