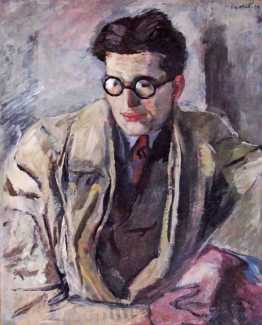 Marcel Słodki grew up in the Polish city of Łódź, and attended the local art school before studying with Carl Johann Becker-Gundahl at the Royal Academy of Arts in Munich from 1910 to 1913. After the outbreak of war in 1914, he avoided internment by moving to Switzerland, where he joined the Dada movement of Tristan Tzara and was one of the first Dadaists in Zurich.

From 1921 to 1924 he lived in Berlin. He was the set designer for the experimental stage show Der Wilden Bühne (The Wild Stage), and worked with Franz Pfemfert on the literary and political magazine Die Aktion. In 1924 Słodki moved to Paris, where he exhibited his works at the Paris Salon des Indépendants in 1928 and the Salon d’Automne in 1937; he also exhibited in Warsaw in 1934 and London in 1938. In 1928 he married the painter Macha Boulanger.

During the Second World War Marcel and Macha lived in hiding in Brive-la-Gaillarde. They were nearly apprehended in 1943, but avoided arrest because they were warned in good time; using forged documents, they fled to Bourg-Saint-Maurice near Chambéry. On 14 December 1943 they were betrayed again, interned in Drancy, and deported to Auschwitz and their deaths three days later.