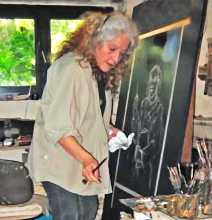 Best-known for her paintings of fairies and Pre-Raphaelite-esque medieval women, The French artist Sophie Busson lives and works in the Brittany village of Landevet, near where she grew up. She has been painting and drawing since the 1970s, and first exhibited in 1973. Her works have appeared in exhibitions in Paris, Nantes, Brest, Rennes, Brussels, Antwerp, Hamburg, Dakar and Osaka, where in 1986 she won the Gold Medal of the Osaka International Festival.

Though it would be easy to label her work as rather pretty and trite, many of her works explore deeper and more thoughtful themes, sometimes tending towards the surrealist. In 1991 Éditions Artus published a monograph of her work.

In 2005 Busson collaborated with the author Lionel Kerlidou to produce Précis de littérature féerique (A Compilation of Fairy-tale Literature), an illustrated collection of tales based loosely on Celtic mythology.