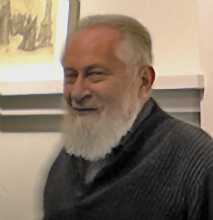 ‘My work remarks on the tradition of Swift and Hogarth,’ American artist Zevi Blum said of his work. ‘My admiration is in the tradition of Oscar Wilde. My filter is architecture.’ Born in Paris to American parents as Moses Zevi Blum, Blum entered Cornell as a fine arts major in 1951. After earning his architecture degree at Cornell, he worked as an architect and fine artist through the 1960s, devoting himself full time to art in 1966 with his first solo gallery shows in New York and California. He joined Cornell as a visiting critic in the Department of Art in 1971, and joined the faculty as an assistant professor in 1974, becoming associate professor in 1977.

He worked in several media, primarily in pen and ink, watercolour and etching. In the early 1970s he began focusing more on etching, and developed a technique that incorporated watercolour with etching. Working with a master printer, he began creating museum-quality giclée prints of his watercolour etchings, often drawing his finely detailed and fanciful images in one pass, with little or no reworking.

Blum was known for the magical realism in his work and was a skilled satirist, depicting topical and political subjects and medieval characters in many of his works. He created illustrations for such publications as Atlantic Monthly, Harper’s, The New York Times Book Review and Readers’ Digest. He also illustrated books, including Samuel Tenenbaum’s The Wise Men of Chelm, John Cleland’s Fanny Hill, and Mark Binder’s The Brothers Schlemiel.

After retiring in 2003, he moved to California with his wife, Barbara, continuing to produce new work. As his Oxford Gallery obituary says, ‘His etchings are both a satire on the pointlessness of human activities and a paean to our fantastic inventiveness. Zevi’s work was erudite without becoming pedantic and satiric without becoming dark or caustic. It exemplifies the mixture of wit and warmth, of humour and humanity, which was the man.’ 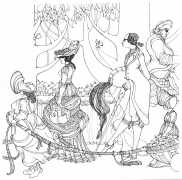 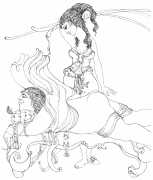 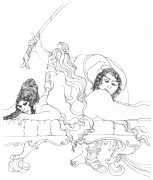 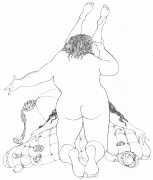