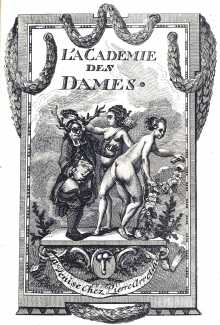 L’académie des dames (The School of Women) is Nicolas Chorier’s reworking of a classic text which first appeared as a work in Latin entitled Aloisiae Sigaeae, Toletanae, Satyra sotadica de arcanis Amoris et Veneris. The manuscript claimed that it was originally written in Spanish by Luisa Sigea de Velasco, a poet and maid of honour at the court of Lisbon, which was then translated into Latin by Jean or Johannes Meursius, a humanist professor teaching history in Leiden. Even though the attribution was a complete fabrication the manuscript circulated through the libertine community at the beginning of the eighteenth century, and was known under many different titles.

Chorier (1612–92) was a French lawyer, writer, and historian. He practised as a lawyer in Grenoble and then as a prosecutor for King Louis XIV. His works on the Dauphiné period remain an important source for historians.

Chorier’s reworking of L’académie des dames is written in the form of a series of dialogues between Tullia, a twenty-six-year-old Italian woman, and her young cousin Otavia, with whom she is charged with her sexual initiation. ‘Your mother asked me to reveal to you the most mysterious secrets of the bridal bed,’ explains Tullia, ‘and to teach you how you must be with your husband, and how your husband will be, detailing the things which strongly inflame men’s passion. So that I can teach you freely, we will sleep together in my bed, which will envelop us in the softest of Venus’s lace.’ Chorier’s text is honest and intelligent, and his women believable, which made L’académie des dames both an entertaining read and a useful educational resource.