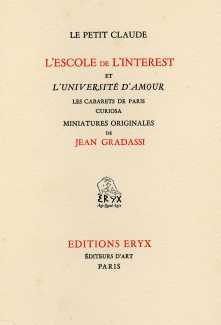 Claude Le Petit, enfant terrible of seventeenth-century Paris, would undoubtedly have produced massively more incendiary writing had he not had the misfortune to be convicted and burned at the stake when he was just 23 years old.

The son of a tailor, he studied with the Jesuits, but after an argument with a monk he hid in his church and (probably accidentally) stabbed and killed him. To evade retribution, he travelled for several years in Spain, Italy, Bohemia, Austria, Hungary, the Netherlands and England, returning to Paris in 1660, where he started studying law. Claude’s response to what he saw as the debauchery of the the nobility, the abuse of authority and the hypocricy of the church found release in satirical writings, of which the best known are L’escole de l’interest et l’université d’amour (The School of Interest and the University of Love) of 1662, and Le bordel des muses (The Whorehouse of the Muses) of 1663.

L’escole de l’interest (supposedly translated from the Spanish of Antolinez de Piedrabuena, but very clearly a Claude original) explores the extreme limits of an entirely libertine, but very gendered, universal education system. The text is full of pseudo-erudition, parodic quotations and poetic fragments, witty and pointed by turn.

And Claude Le Petit’s demise? The story goes that one day in August 1662, having neglected to close his window, the wind blew away some of his papers, among which was a blasphemous song about the Virgin Mary. The poem was picked up by a priest, who took it straight to the Royal Procurator. The next thing was that his printers, the Rebuffé brother in rue Saint-Germain, near Pont-Neuf, were raided, and printed pages of his work seized and destroyed. Their author was arrested and imprisoned, and his rooms searched, where more seditious material was recovered. The atheist, libertine and free-thinker quickly went to trial, and was condemned to be burned alive in place de Grève. An appeal was dismissed, and Le Petit mounted the stake on 1 September 1662.

The Gradassi-illustrated L’escole de l’interest was published by Éditions Eryx in a limited numbered boxed edition of 490 copies.