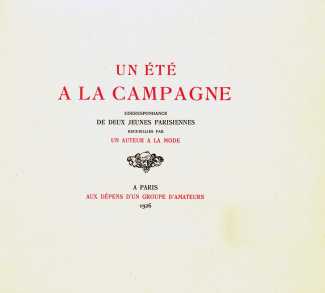 Un été à la campagne (A Summer in the Countryside) was published in Paris in 1868, and is almost certainly by the novelist and journalist Gustave Droz (1832–95), though some think that the publisher Auguste Poulet-Malassis (1825–78) may have had a hand in its publication, if not in the writing.

Adèle and Albertine are adolescent school friends, looking forward to the summer holidays in the French countryside with their respective families; they are also thinking rather a lot about sex. The book is written as a series of forty-one letters, describing in detail how their experiences of intimacy develop over the long hot months.

Though there was an amateurly-illustrated edition of Un été published in Brussels in 1875 and one in Paris in 1905 recycling the same plates, Brouet was the first of several professional engravers commissioned to illustrate Un été, and clearly enjoyed the challenge. Although anatomy, especially of the naked body, was never his strongest suit, he nevertheless conveys the heat and passion of explored intimacy with his trademark simplicity and vigour. The book itself contained eight plates together with two chapter openers and an endpiece; as an added incentive to purchasers two slightly more risqué ‘planches refusées’ (supposedly ‘refused’ but always intended to be included) were included in a pocket at the end of the book. Later illustrators of Droz’s epistolatory novel include Frans de Geetere, Jean-Adrien Mercier and Gaston Barret.

In 1901 a private press English translation of Un été à la campagne was published in Paris, which you can read here, and an online French text can be found here. To get you started, here is the author’s introduction to the book:

The letters we present here, a correspondence between two young girls, were never (as I am assured you understand) intended for publication. How and under what circumstances they fell into our hands will be of little interest to the reader; the main thing is that you enjoy them.
As we do not want to make any assumptions about our readers, we strongly advise anyone with strict principles and austere manners, the chaste, the devout and the prudish, to be careful not to open this book, the reading of which might seriously compromise the chances of them ever occupying their numbered seat in paradise.
On the other hand, we cannot recommend these letters too much to those who appreciate what in life is pleasant and attractive; to old men still full of imagination and ardour, but whose abilities, unfortunately failing, need a slight stimulus; to young people of both sexes who, barely on the threshold of experience, have the laudable ambition of educating themselves and spending as liberally and as swiftly as possible the sum of enjoyment that mother nature, in her munificence, has been kind enough to set aside for them.
That said, and without further preamble, we hand the floor to our two generous correspondents.

Un été à la campagne was published in Paris ‘Au dépens d’un groupe d’amateurs’ (at the expense of a group of amateurs), though almost certainly under the direction of Gaston Boutitie, Brouet’s friend and publisher, who in 1923 had produced a very successful two-volume edition of Brouet’s engravings. Un été à la campagne was produced in a limited numbered edition of 125 copies.

We are very grateful to the Auguste Brouet Journal website, which you can find here, for this set of illustrations.