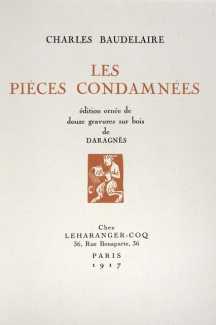 Charles Baudelaire’s Fleurs du mal (The Flowers of Evil) was first published in 1857, but neither of the first two editions included the six poems known as Pièces condamnées (The Banned Poems), which were omitted at the demand of the French government censors. The ‘forbidden’ poems (‘Lesbos’, ‘Femmes damnées (à la pâle clarté)’, ‘Le Léthé’, ‘À celle qui est trop gaie’, ‘Les bijoux’, and ‘Les métamorphoses du vampire’) appeared in print in 1866, but were officially banned in France until the 1940s because of their lesbian and sado-erotic content. This made them particularly attractive to publishers of limited illustrated editions.

Following hard on the heels of his Verlaine illustrations, Daragnès was clearly drawn to the earthiness of these Baudelaire poems, and produced a similarly bold set of woodcuts to illustrate them. Each block was printed in two versions, one in black and one in an orange-red or ‘sanguine’.

The edition consisted of 250 copies, of which thirty included both colour versions, and an additional twelve one of the original drawings. Again self-published, the imprint of Chez Leharanger-Coq, Paris, continues the ‘bold rooster’ theme.