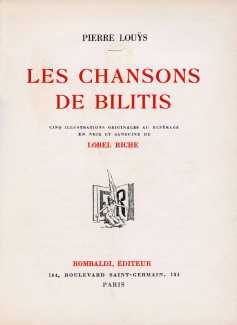 It was inevitable that at some point Lobel-Riche would be commissioned to illustrate Pierre Louÿs’ cod-classic Les chansons de Bilitis (Songs of Bilitis); as with Salammbô that commission came from Rombaldi, and again for just five colour plates.

We have included these here for completeness rather than quality, and because they are among the most accessible of Lobel-Riche’s work having been printed in quantity; they show every sign of having been worked on quickly and without enthusiasm, but even so demonstrate his skill with female anatomy.

Les chansons de Bilitis was published by Rombaldi in a numbered edition of 2,600 copies.