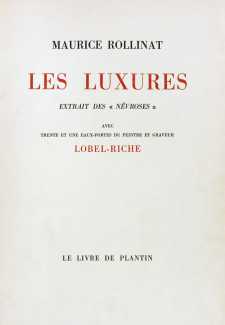 The French poet Maurice Rollinat (1846–1903) grew up in a literary family. His father was a friend of George Sand, whose influence is very marked in young Rollinat’s first volume, Dans les brandes (In the Embers, 1877), and to whom it was dedicated. After its publication, he abandoned realism and worked in a very different manner. He joined a literary circle that called themselves Les Hydropathes, founded by Émile Goudeau, an anti-clerical group with ties to the decadent literary movement. Under their influence he wrote the poems that made his reputation. In Les névroses (The Neuroses), he showed himself as a disciple of Charles Baudelaire, exploring the physical horrors of pain and death. This volume, Les luxures (The Luxuries) is the best-known section of Les névroses.

Rollinat was musician as well as poet, and set many of his poems to music. He appeared regularly at the Paris cabaret Le Chat Noir, where he performed his poems with piano accompaniment. His gaunt and pale appearance made his portrait a favourite subject for a number of painters, and the startling subjects of his verses brought him short-lived fame; at the height of his popularity he drew a number of celebrities to the cabaret to see him perform, including Oscar Wilde.

Rollinat married the actress Cécile Pouettre, and when she died from rabies in 1903 he was distraught; after several suicide attempts he died in an insane asylum.

Both Baudelaire and Rollinat were among Lobel-Riche’s favourite poets, sharing his deep feeling and understanding of pain and death.

Les luxures was published by Le Livre de Plantin in a limited numbered edition of 210 copies.