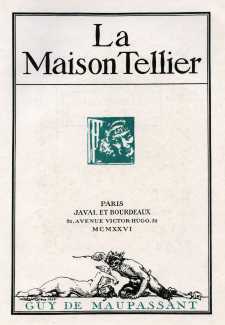 One of Guy de Maupassant’s best stories, written in 1881, La Maison Tellier tells of the madame of a small-town brothel in Normandy who receives an invitation to her niece’s confirmation from her brother, who knows nothing of her ‘business’. She decides to take her five girls with her, and her regular patrons are taken aback when they discover the establishment is closed without explanation.

Lobel-Riche’s detailed and atmospheric etchings to accompany the story capture the wit and pace of Maupassant’s narrative, bringing Madame Tellier and her charges to life. Here is the description of the girls from the story; see if you can match them to Lobel-Riche’s depictions of them:

The names of the girls on the first floor were Fernande, Raphaele, and Rosa, the Jade. As the staff was limited, madame had endeavoured that each member of it should be a pattern, an epitome of the feminine type, so that every customer might find as nearly as possible the realisation of his ideal. Fernande represented the handsome blonde; she was very tall, rather fat, and lazy; a country girl, who could not get rid of her freckles, and whose short, light, almost colourless, tow-like hair, like combed-out hemp, barely covered her head.
Raphaele, who came from Marseilles, played the indispensable part of the handsome Jewess, and was thin, with high cheekbones, which were covered with rouge, and black hair covered with pomatum, which curled on her forehead. Her eyes would have been handsome, if the right one had not had a speck in it. Her Roman nose came down over a square jaw, where two false upper teeth contrasted strangely with the bad colour of the rest.
Rosa was a little roll of fat, nearly all body, with very short legs, and from morning till night she sang songs, which were alternately risqué or sentimental, in a harsh voice; told silly, interminable tales, and only stopped talking in order to eat, and left off eating in order to talk; she was never still, and was active as a squirrel, in spite of her embonpoint and her short legs; her laugh, which was a torrent of shrill cries, resounded here and there, ceaselessly, in a bedroom, in the loft, in the cafe, everywhere, and all about nothing.
The two women on the ground floor, Lodise, who was nicknamed La Cocotte, and Flora, whom they called Balançoise, because she limped a little, the former always dressed as the Goddess of Liberty, with a tri-coloured sash, and the other as a Spanish woman, with a string of copper coins in her carroty hair, which jingled at every uneven step, looked like cooks dressed up for the carnival. They were like all other women of the lower orders, neither uglier nor better looking than they usually are. They looked just like servants at an inn, and were generally called ‘the two pumps.’
A jealous peace, which was, however, very rarely disturbed, reigned among these five women, thanks to Madame Tellier’s conciliatory wisdom, and to her constant good humour, and the establishment, which was the only one of the kind in the little town, was very much frequented. Madame Tellier had succeeded in giving it such a respectable appearance, she was so amiable and obliging to everybody, her good heart was so well known, that she was treated with a certain amount of consideration. The regular customers spent money on her, and were delighted when she was especially friendly toward them, and when they met during the day, they would say: ‘Until this evening, you know where,’ just as men say: ‘At the club, after dinner.’ In a word, Madame Tellier’s house was somewhere to go to, and they very rarely missed their daily meetings there.

La Maison Tellier was published by Javal et Bourdeaux in a limited numbered edition of 375 copies.