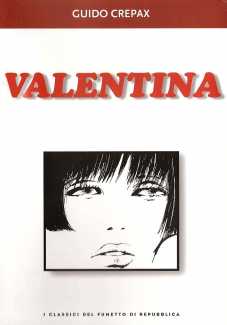 Valentina, the sophisticated Milanese photographer pursued relentlessly by sadistic Nazis, astronauts, seventeenth-century pirates and leather-booted Czarist Cossacks, made her first appearance in the spring of 1965 appearing in the second issue of Linus, an Italian magazine devoted to comic-strip art to which friends asked Crepax to contribute. Crepax was thirty-two when he created Valentina, a latecomer perhaps, but certainly by then an experienced draughtsman.

It was Valentina which proved for Crepax the potentiality of cartoon literature or ‘fumetti’, an art form he had previously attempted when as a young evacuee during World War Two in Venice he had read and loved the American cartoon strips Mandrake and Flash Gordon. ‘My first cartoon,’ he recalls, ‘I did when I was twelve, and it was called The Invisible Man; it obviously followed very closely the film of the same name. I put everything together on my own, the screenplay as it were, the writing and the drawings.’ Twenty years later Crepax set about creating his cartoon strip for Linus magazine with the same attention to planning, story-line, lettering, and framing, inventing his own male superhero Neutron, ‘with the magnetic eyes of Mandrake and the physical build of the traditional Man In the Mask.’ Gradually Neutron disappeared from the story. It was almost by chance and without premeditation that the true protagonist would prove to be Valentina, ‘the incarnation of Louise Brooks, the masochistic dreamer, the all-powerful photographer, the most beautiful androgyne with the most beautiful backside in the world’.

In a series of extravagant and often surreal adventures, Valentina would soon know the rages of bisexuality, autoerotic ecstasy, super-sensual abandon, and the sadomasochistic delirium. Her body given up without inhibition, fragmented on the page and scrutinised in minute detail in a style of syncopated editing which reminded critics of the French films of the sixties, the nouvelle vague. Valentina would scandalise many readers in Italy and abroad, and be the inspiration for a series of similar sexy and captivating heroines who would keep Crepax busy at his drawing board for years to come.

We reproduce here a sequence from the first Valentina paperback book; this was the first time Crepax’s eager audience saw Valentina naked a she opens a suspicious wardrobe which happens to be the portal to a subterranean world of sadistic otherworldly humanoids. This is from the Italian edition; if you want the English version you will need to find the elusive 1991 Eurotica edition.

This text, reproduced with thanks, is by Stefan Prince, adapted and abridged from an article written in the spring of 2000 and published in Skin Two magazine #33