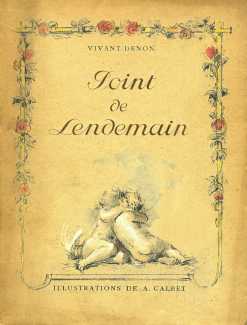 Denon’s Point de lendemain (No Tomorrow), written in 1777, is the archetypal story of a one-night liaison, rightly recognised as a literary masterpiece. In just thirty or so pages, the narrative perfectly captures the libertine essence of the French eighteenth century. Summoned by Madame de T— to her country house, the young hero of Denon’s novella is taken on a tour of the grounds, only the beginning of a night that not only will be full of unanticipated delights, but will give rise to unforeseen, perhaps unanswerable, questions. With Point de lendemain, Denon celebrates the subtle seductions and the intense voluptés of vicomtes and marquises, set in rococo landscapes à la Watteau and lavish interiors worthy of Duc de Barry. Point de lendemain is as graceful as a painting by Fragonard and as sensuous as one of Boucher’s, as sharp and well-written as a Voltairian epigram. 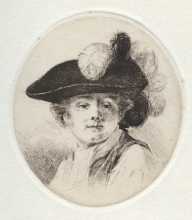 Its author, Dominique Vivant, Baron Denon (1747–1825) was a man of many talents – artist, writer, diplomat, author and archaeologist. He was appointed as the first director of the Louvre museum by Napoleon after the Egyptian campaign of 1798–1801, and is commemorated in the Denon Wing of the modern museum and in the Dominique-Vivant Denon Research Center. His two-volume Voyage dans la basse et la haute Egypte (Journey in Lower and Upper Egypt) of 1802 was in many ways the foundation of modern Egyptology.

The Calbet-illustrated Point de lendemain was published by Éditions de la Mappemonde in a limited numbered edition of 790 copies. It includes an extended literary and historic introduction by Fernand Fleuret. There is an excellent English translation of No Tomorrow by Lydia Davis, which was published in 2009 by New York Review Books.