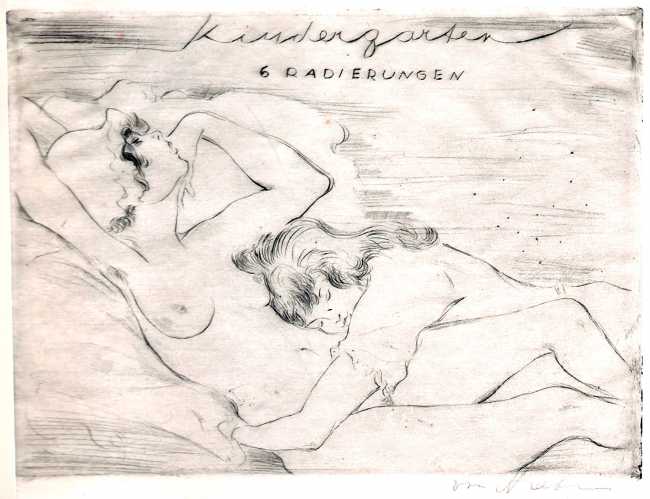 Kindergarten, another Schoff–Gurlitt production, was produced in such a small edition that almost nothing is known about it. The set of seven etchings (the cover says six) are all signed individually by Schoff, each featuring two people exploring each other’s bodies, rather in a sensual, loving manner rather than overtly sexual, as befits the title.

It is hard from the perspective of a century later to imagine the 1920s relationship between sensuality, corporeality and intimacy, and particularly how this was perceived and interpreted where children were concerned. Especially in interwar Germany, there was a widespread belief – and practice – in the efficacy of Freilichtkultur  (open air culture) and Nacktkultur (nakedness); exposing and sharing naked bodies was much further down the path of acceptability than in today’s highly sexualised world. This relative freedom and acceptance of nakedness is still apparent in many parts of Germany, where sunbathing and swimming naked are usually seen as quite normal.