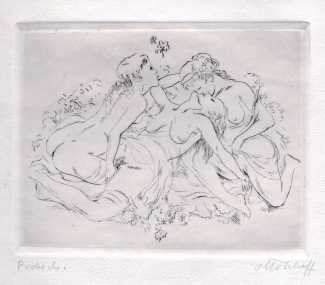 Six of Schoff’s Sappho engravings formed part of a much larger Gurlitt project, the nine-volume Der Venuswagen (The Chariot of Venus), which also included erotic portfolios by Lovis Corinth, Richard Janthur, Georg Walter Rössner, Franz Christophe, Willy Jaeckel, Paul Scheurich, Wilhelm Wagner and Willi Geiger; it was produced in an edition of 700 copies. Within two weeks of publication, the copies of Venuswagen still at the publisher were confiscated by the Berlin authorities. The art critic Kurt Tucholsky wrote an article titled ‘Der Zensor geht um!’ (The Censor is About!) in the weekly Weltbühne, which concludes ‘I do not want to be told by Public Prosecutor Orthmann what I can read, and if it continues like this, then in four weeks we will have a situation no different from Metternich’s censorship. The prosecutor does not need to know that Lovis Corinth is president of the Secession and an academy professor, nor that Georg Walter Rössner is a teacher at the state art school in Berlin, but he does need to take note that German writers, German painters and German publishers are not disposed to put up with the bullying intervention of a man who is incapable of any judgment whatsoever.’