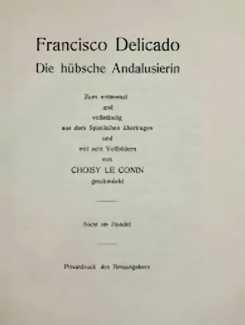 Francisco Delicado or Delgado (1480–1535) was a Spanish writer, and beyond his picaresque short novel El retrato de la Loçana Andaluza (Portrait of Lozana: The Lusty Andalusian Woman) very little is known about his life. He was born in Cordoba in Spain, and in his twenties moved to Rome, where he became a vicar and Italianised his surname to Delicado. After the sack of Rome, he went to Venice where he wrote his novel about Lozana.

The book begins in Cordoba, where the sexually precocious Aldonza lives with her mother. After her mother’s death, she moves to her aunt’s house from where she escapes with Diomedes, a sea merchant. After travelling to many cities of the Mediterranean Sea and the Middle East and changing her name to Lozana, they come to Marseille to meet the father of Diomedes, who, disgusted with his son, sends him to prison and pays a sailor to make Lozana disappear. However, the sailor disobeys the order, and takes Lozana to Livorno, where she continues her journey up to Rome. Not having any money, Lozana goes to the Spanish neighbourhood to request help. The women there appreciate her abilities in cooking and medicine and her beauty (although her face is rather disfigured by syphilis), and after a Neapolitan woman gives her a servant called Rampin, Lozana makes an agreement with him and he becomes both her servant and her lover. With the aid of a Jew called Trigos, she begins a new life as a prostitute, eventually ending up as the brothel’s madame.

The title page of the German translation, Die hübsche Andalusierin, suggests that von Bayros (under his Choisy le Conin pseudonym) is both translator and illustrator, though it is almost certain that the translation is by Heinrich Conrad.

The Die hübsche Andalusierin portfolio was produced in a limited numbered edition of 600 copies.