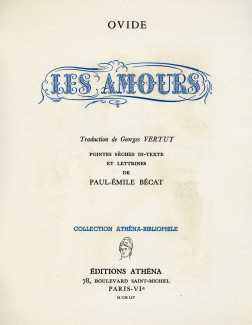 This companion Athéna volume to L’art d’amour, a much-abridged version of Ovid’s advice about intimate relating, appeared three years later. Amores (Loves or Les amours) was written by Ovid in 16CE; the present volume contains just the first of three books written in elegaic meter, describing the many aspects of love and focusing on the poet’s relationship with a mistress called Corinna.

Les amours again uses a new translation by George Vertut, and now Bécat’s twelve engravings show clearly that we are in the 1950s, bearing much more relation to La garçonne and Le diable au corps than to his interwar work.

Les amours appears to have been produced in two limited editions, one of 770 copies in 1954 and another of 997 copies the following year. All are numbered and were supplied in a slipcase.