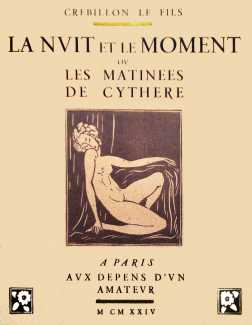 Le nuit et le moment, ou les matinées de Cythere (The Night and the Right Time, or the mornings of Cythera) is by the eighteenth-century writer Claude Prosper Jolyot de Crébillon. In this witty 1755 dialogue the questioning Clitandre comes to Cidalise’s chamber to discuss his relationship problems with her; she is surprised by his arrival, but quickly warms to the subject as she is having similar issues of her own. Thus in the course of one night, a man and a woman, each in love with somebody else, gradually warm to each other until they forget past pleasures in present passions. Satire, irony, word play and scandal abound.

Sylvain Sauvage’s colourful illustrations perfectly complement Crébillon’s entertaining text; he clearly enjoyed the task. In addition to the ten watercolours Sauvage characteristically experimented with printing in gold ink, hence the three smaller images. The coloured drawing of Cidalise is the frontispiece to the book.

The Sauvage-illustrated Le nuit et le moment was published ‘Aux dépens d’un amateur’ (at the expense of an admirer) in a limited numbered edition of 230 copies.

We are very grateful to Jean-Baptiste Brunier of the bookshop Librairie Au Sud de Nulle Part in Le Landreau for these illustrations.