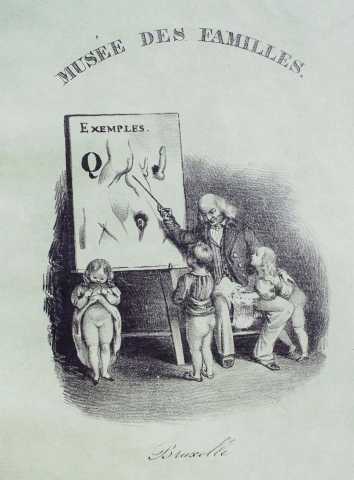 This rare album of uncoloured Devéria prints was published in Brussels some time between 1835 and 1840; only two or three copies are known to have survived, and each includes a slightly different set of plates. This is unsurprising – Devéria and his print-sellers regularly borrowed prints from other sets to make up a new product, and buyers and collectors mixed and matched Devéria prints and those from similar artists to produce their own unique portfolios. The one sold by Christie’s in 2006, which had belonged to Gérard Nordmann, contained 41 prints of which 24 were attributed to Devéria; their original owner had mounted the prints on boards and numbered them, telling us more about his (presumably his) taste than the original source of the prints.

As with the military-themed portfolio Tactiques militaires, three of the Musée des familles plates are also included (in coloured versions) in Les petits jeux innocens. The opportunity to recycle was rarely missed.