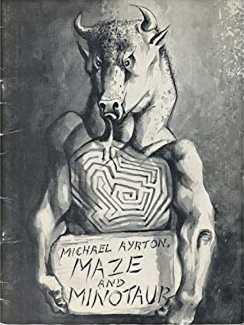 It may seem out of place to include Michael Ayrton’s minotaur etchings in a collection of erotica, but the connection is far from tenuous. A reminder of the story first. After ascending the throne of the island of Crete, Minos competed with his brothers as ruler. Minos prayed to the sea god Poseidon to send him a snow-white bull as a sign of the gods’ favour. Minos was to sacrifice the bull to honour Poseidon, but the bull was so beautiful that he decided instead to keep him. Minos believed that the god would accept a substitute sacrifice. To punish Minos, Poseidon made Minos’ wife Pasiphaë fall in love with the bull. Pasiphaë had the craftsman Daedalus fashion a hollow wooden cow, into which she climbed in order to mate with the bull. The monstrous minotaur was the result. Pasiphaë nursed the minotaur, but as he grew in size he became ferocious. As the unnatural offspring of a woman and a beast, the minotaur had no natural source of nourishment, and thus devoured humans for sustenance. Minos, following advice from the oracle at Delphi, had Daedalus construct a labyrinth to keep the minotaur under control.

So in the story of the minotaur we have all the elements of human and superhuman love and lust, including the all-important aspect of a power beyond human control and needing to be contained. It sounds rather like an uncontrolled and uncontrollable sexual urge, hence the logic for including this important portfolio.

The minotaur was a powerful archetype which occupied Michael Ayrton for over ten years of his artistic life. Beginning in 1961, he wrote and created many works associated with the myths of the minotaur and Daedalus, the legendary inventor and maze builder. Related works include bronze sculptures, the autobiographical novel The Maze Maker (1967), and this series of minotaur etchings.

At the centre of the maze, in all meanings of the expression, is the minotaur, and Michael Ayrton’s identification of himself with the minotaur lies at the root of his compulsive images. Half bull and half man, the minotaur stands isolated among the hybrids of the classical world. Whereas satyrs and centaurs symbolise the animal urges of man held in check by civilisation, the minotaur represents, in the words of John Berger, ‘the animal in captivity of an almost human form, and the suffering which is caused by aspiration and sensibility being rejected because they exist in an unattractive, untamed, uncivilised body’. Here it represents Ayrton’s frustration at never being able to communicate fully with the world.