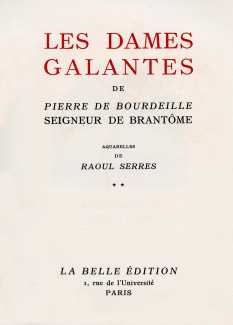 Pierre de Bourdeille, usually known as Brantôme after the abbey of which he was secular abbot, fancied himself both as a soldier and as a writer, though by all accounts he was not very good as the former. Born into a family of nobles in 1537, he became a model courtier and a career soldier, but nearly always contrived to arrive too late or be in the wrong place to take an active part in the fighting. Which is maybe just as well, as he was a better writer than he was a soldier. All of his copious writings were published after his death in 1614, the best-known being La vie des dames galantes (The Life of Gallant Ladies), a collection of stories about women who used – and abused – their position to achieve their amorous goals.

The Serres-illustrated Les dames galantes was published by La Belle Édition, Paris, in a limited numbered edition of 1200 copies. The two volumes were issued in an elegant white slipcase or étui.