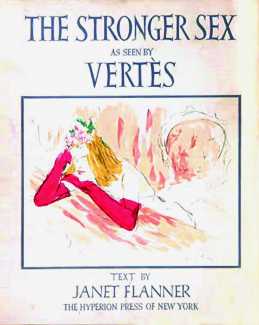 We do not know whether Marcel Vertès and Janet Flanner first met in Paris or New York, but it was a meeting of minds and of artistic outlooks. The journalist Janet Flanner (1892–1978) served as the Paris correspondent of The New Yorker magazine from 1925 until she retired in 1975. She wrote under the pen-name ‘Genêt’, and as well as journlism she also wrote a novel, The Cubical City, set in New York.

Moving in the same circles, journalist and artist would inevitably have crossed paths, and may even briefly have been lovers (Flanner had several concurrent relationships during her time in France). Vertès admired strong women, which Flanner certainly was. This collaboration for The Hyperion Press was a happy one, Flanner providing a short but punchy text to accompany two dozen trademark Vertès prints, mostly referring to the artist’s experiences in New York.

The titles of the prints are:

The Stronger Sex was published by The Hyperion Press, New York, in a limited numbered edition of 1,750 copies.