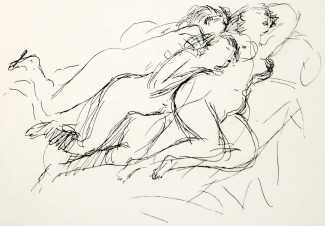 Following in the footsteps of Henri de Toulouse-Lautrec, of whom Marcel was a great admirer, Vertès was fascinated by the Parisian underworld of brothels and street girls, and their lascivious clientele. In Amandes vertes Marcel Vertès writes about his first visit to a Paris brothel or maison de passe:

I had been living in Paris for several months when I was asked to meet a rich and respectable industrialist from Budapest who was visiting Paris with his wife. He wanted me to be his guide. No sooner had he arrived he begged me, winking, to lead him ‘to a place where one could be amused’. I did not know any addresses, so I turned to a taxi driver who sent us to a certain Madame Blanche in rue de Châteaudun.
They asked us to sit down in soft chairs and attend the ‘show’. A rather disappointing act. I began to get bored. Fortunately there was a more entertaining attraction: two small, graceful girls with bent knees and little bows in their hair. They sat together half naked alongside their carefully folded short pleated skirts and corsets. Charming. I tried to draw them, but the light was bad.
The following day I returned alone to the brothel, and asked the sous maitresse if it was possible to see the two ‘children’ again. ‘Follow me, sir!’ she said, opening a door. The two thirty-year-old ladies were waiting for customers in a rococo salon, one knitting and the other reading the Petit Parisien. ‘Here, sir.’ 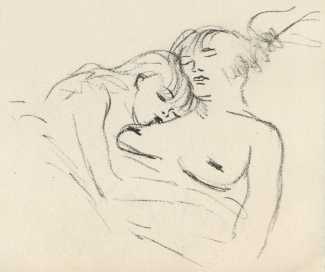 Fortunately I had already made some drawings of the two ‘wrong minors’ the evening before, and these drawings were the beginning of the series for Les jeux du demi-jour by Pierre Mac Orlan, which I illustrated with lithographs on behalf of the author.

Fabienne Jamet, the mistress of the infamous One-Two-Two, wrote about Vertès, ‘The painter Vèrtes often accompanied us on our nightly baptism. I had seen some pictures of his private pornographic collection, and he was always in my awareness. In his pictures he always depicted magnificently-endowed, charming women, together with disgustingly fat-bellied old men, or beautiful dainty boys with horrible old witches. I always gave him what he wanted. And today I am very sorry, because now these pictures of Vertès achieve astronomical sums at the Paris art exhibitions.’

Les jeux du demi-jour with text by Pierre Mac Orlan and lithographs by Marcel Vertès was published by Les Arts et le Livre in a limited numbered edition of 600 copies.

In addition to Marcel Vertès’ own description above, Nicholas Shakespeare has written a graphic and detailed (how fictionalised we cannot know) account of how Vertès introduced his long-term lover Gillian Hammond to the brothel scene. Here is his description, from Chapter 14 of Priscilla: The Hidden Life of an Englishwoman in Wartime France:

Vertès had a Buick, black with tan leather seats. Hood down in the summer, he drove Gillian to an auberge in Ville d’Avray. ‘I was called Madame instead of the inevitable Mademoiselle which made us laugh. I always looked like a schoolgirl, une jeune fille bien élevée, Koestler called me.’ Vertès said that Gillian was too young to smoke – her cigarettes had to be bought for her. But as Gillian crisply observed to Priscilla, she was not too young to bed.
The majority of their rendezvous were in maisons de passe. Paris was full of discreet places of assignation for couples without suitcases, the addresses passed around by word of mouth. Nothing from the façade indicated that the building was anything other than a respectable hôtel particulier.
Vertès's favourite maison de passe was in Rue Cambacérès. Gillian described to Priscilla her first visit. Her outfit: a tartan skirt, but no petit culot underneath, exactly as Vertès had instructed. Her perfume: Shocking, from a bust-shaped bottle that he had given her. A pretty blonde soubrette with white collar and cuffs ushered her into the lift. The small stylish room was furnished all in black. Headlights from passing cars lit up rose-coloured paper pompons, brushes filled with strands of hair, and two night tables, each with a napkin carrying the words: ‘Bless the love you owe your life’.
Gillian also went with Vertès to the notorious One-Two-Two in Rue de Provence. When his finances were low, they ended up in less grand establish­ments, smelling of cheap powder, where the madam asked, ‘C’est pour un moment ou pour l’après-midi?’ There was a wash basin, a collapsible bidet hidden behind a ramshackle screen, thin walls. ‘We listened once to a couple next door making love. The woman said, “Fort, fort, trésor”.’ 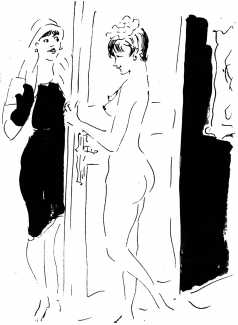 The madam always banged on the door if they overstayed their ‘moment’. Vertès used these places to gather material for his lithographs. Gillian said: ‘I would suggest other quarters that I had heard about. So we explored crummy rooms frequented by whores.’
One rainy night Gillian suggested the Panier Fleuri, the brothel where Robert had taken her and Priscilla. Both girls had longed to know what went on upstairs. Gillian was now able to report back. While she sketched Priscilla wearing a pair of Schiaparelli beach pantaloons, she revealed what she had seen.
Vertès escorted Gillian through a metal door and paid the fee, 30 francs for men, 20 for women. They climbed to the first floor. Lined along the corridor were eight portable bidets filled with water. Two women stepped out of a door, in long white cotton shirts and wearing black velvet masks, and quickly washed, wiping themselves with a serviette, and left as fast as they came.
‘This looks promising,’ said Vertès, pushing Gillian after them.
They entered a crowded room smelling of tobacco and wet dog. A heavy-jowled man in a leather jacket sprawled across a couch, two women in his arms. On Gillian’s right, a soldier, belt still on, made love standing up to a woman whose feet did not touch the ground. On the carpet, a man in a taxi driver’s cap was spread on his back, a woman’s mouth in his black pants. Gillian watched a blonde girl allow, with an expression of tragic indifference, a couple to mount her from behind. Was she drugged?
Gillian felt ashamed, but also disturbingly excited. She leaned against Vertès, who put his arm on her shoulder. He slipped his hand under her bodice and cupped her breast with his palm. A warm flush burned through her. Soft, moist, every nerve taut, there on the couch right away, she could ... But he removed his hand. Unappeased, humiliated, she turned on her heels. She tried to leave, but Vertès held her, whispering reassurances, and she stayed.
‘Let's go next door.’
There the crowd was less dense. A fat middle-aged woman reclined on a couch, smoking and chatting to two men. Suddenly, the door opened, letting in one of the masked girls, who ran over to the couch and seized the woman's hand, kissing it. ‘You're not still angry?’ The woman deliberately paid no attention, until the girl stopped her kisses and lifted the woman’s skirt.
Gillian saw that she had nothing on underneath. Light from a garnet cloth shade fell on a very white belly and a dark triangle. The girl spread the woman’s legs, long and fleshy, with rolls of fat above the knees, and buried her face between them. The woman crushed out her cigarette, lay back.
Vertès and Gillian joined the silent circle that formed around the couch. Ten minutes at least passed before the woman, writhing under the girl’s kisses, abruptly raised her arms, fists beating against the wooden sides of the couch, back arching, head shaking in every direction, and collapsed, panting, folded in half, still squeezing the girl’s masked face between her thighs.
Some images from that night remained so vivid and shameful that for months afterwards Gillian blushed when she thought of them, and yet she could not stop thinking about them.