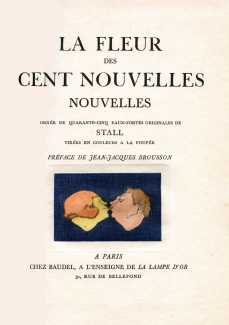 In 1929 Clement Lapuszewski was commissioned by the upmarket Paris publisher Baudel to illustrate a collection of fifteen short stories – Le Fleur or ‘The Cream’ – selected from the fifteenth-century collection of salacious tales Les cent nouvelles nouvelles (The Hundred New Stories).

The Cent nouvelles nouvelles is a collection of stories supposed to be narrated by various persons at the court of Philippe le Bon, and collected together by Antoine de la Sale in the mid-15th century. The Nouvelles, collected (and probably written) by de la Sale, are according to the authority on French literature George Saintsbury ‘undoubtedly the first work of literary prose in French. The short prose tale of a comic character is the one French literary product the pre-eminence and perfection of which it is impossible to dispute, and the prose tale first appears to advantage in the Cent nouvelles nouvelles.’

The stories provide fascinating glimpses of life in the fifteenth century. Historian Charles Lenient writes ‘Generally the incidents and personages belong to the bourgeoisie; there is nothing chivalric, nothing wonderful; no dreamy lovers, romantic dames, fairies or enchanters. Noble dames, nuns, knights, merchants, monks and peasants mutually dupe each other. The lord deceives the miller’s wife by imposing on her simplicity, and the miller retaliates in much the same manner. The vices of monks are depicted in half a score tales, and the seducers are punished with a severity not always in proportion to the offence.’

Lapuszewski’s illustrations for the Nouvelles are witty, original and innovative. The header for each tale introduces the characters, each tale has a main plate, and where there is room at the end of a tale a small image, usually signed ‘St’ for Stall, is inserted. Many of the plates are also daring in exploring the limits of printing, with fine crosshatching and detailed line work often almost disappearing into a dark background.