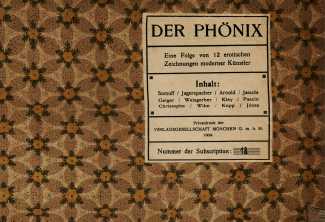 Hugo Hayn and Alfred Gotendorf, in their nine-volume Bibliotheca Germanorum Erotica und Curiosa (1912–14), wrote of Der Phönix ‘All the plates are characterised by unheard-of boldness and exuberance. However, the work in an edition of 400 copies was soon confiscated and mostly destroyed.’

This copy of Der Phönix, with the number 20 (suggesting an early and enthusiastic subscriber), was part of the collection of Sieglinde and Karl Ludwig Leonhardt, which was sold at auction by Pierre Bergé in Paris in December 2009; it was sold again at auction by Nösbusch & Stucke in Berlin in January 2016. It appears to be one of the very few complete copies to have survived.