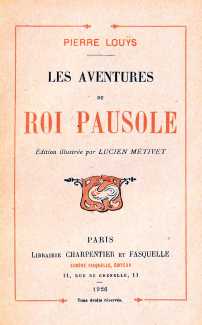 It was virtually inevitable that Métivet would be commissioned to produce a set of illustrations for Pierre Louÿs’ ever-popular Les aventures du Roi Pausole, set in the libertine realm of Tryphême where King Pausole rules with the support of his 366 wives and his wayward daughter, the fair Aline.

Pausole had been illustrated several times before, and would be many times again, but in one of the most extensively-illustrated editions of the book, with more than a hundred illustrations, Lucien Métivet made the most of the Tryphême tradition that all young beautiful women go naked as much of the time as possible.

We are grateful to our friend Mario for sharing these images with us.