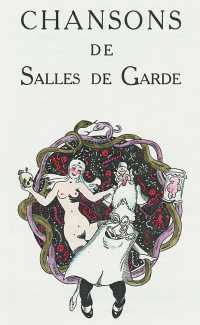 Here we have one of those French traditions which is almost impossible to understand in translation – chansons de salles de garde, literally ‘waiting room songs’. The hospital common rooms in question have a long tradition stretching back to the twelfth century Hôtels-Dieu or ‘Maisons de Charité’, developing over the centuries into breathing spaces where doctors and interns could relax and recover; they were often part of the establishment’s staff accommodation. Traditionally these spaces were free from administrative control, having alternative ‘rules’ of their own where doctors (all men of course until very recently) could let off steam. And an important part of that tradition is the sexually explicit bawdy song; awaiting procedures which may result in pain or too commonly death requires a libertine outlook, so singing risqué songs is often the best way to pass the time. Chansons de salles de garde is a particularly French tradition – neither ‘bawdy ballads’ in English nor ‘lustige Lieder’ in German are quite as in-your-face.

Here we have fifty of the best of the tradition, with titles like ‘Les poils de cul’ (cunt hair) and ‘La digue du cul’ (the arse dam), each with appropriately explicit and colourful drawings together with words and music hand-drawn by Morvan, a true labour of love. As well as the songs, the eight page-foot vignettes explore the limits of humorous sexual imagery.