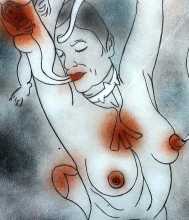 Cour galante et rage lubrique (Gallant Courtship and Lustful Rage) is a selection of Claude Bolduc’s more explicitly sexual work, created during his time in Switzerland. In addition to the intertwining bodies, rabbits, snakes, frogs, wolves and teddy bears make regular appearances, while the many-seeing and often multi-replicating eyes appear throughout the sequence.

Every image has a story to tell, both the narrative suggested by the artist and any related subtexts supplied by the viewer’s individual imagination. Thus the third painting is titled ‘Cathy aux jeux olympiques’ (Cathy at the Olympic Games), but whose skates are those, what is the man seeing with his two pairs of eyes, and what is under Cathy’s feet? Naive Bolduc’s painting style might be, but the subject matter and treatment are never simplistic.