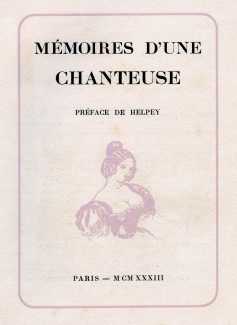 The first French edition, without illustrations, was published by the Bibliothèque des Curieux in 1913, with an appreciative introduction by the poet Guillaume Apollinaire. This 1933 edition, illustrated by Berthomme Saint-André, includes a new preface by the poet Louis Perceau, here under his ‘Helpey’ pseudonym. The subject matter is perfect for Saint-André’s graphic style, and the Chanteuse illustrations are some of the most explicit he created. The illustrations were printed in monochrome; in our copy the first three have been delicately hand-coloured.

Mémoires d’une chanteuse was published anonymously in Paris, in a limited numbered edition of 295 copies.