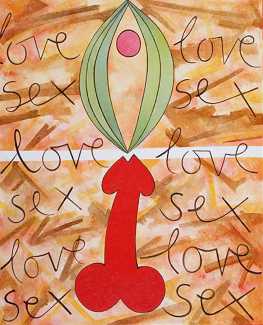 Here is a wide-ranging selection of Caroline Coon’s work over the years, from an early college study and her banned ‘Mr Olympia’ to her defiant and honest ‘Self with Delphinium age 70’. Worthy of note are political statements like ‘Oz Trio’, featuring the prosecuted editors Richard Neville, Felix Dennis and Jim Anderson from the celebrated obscenity trial of 1971, and ‘Valerie Solanas’ with her 1967 SCUM (Society for Cutting Up Men) Manifesto, appropriately accompanied by a severed member. We have also included several of the ‘Ladbroke Grove’ series, together with the much-discussed ‘Rush Hour: She Strips them Naked with her Eyes’, in which the men ogling naked bodies in the tabloids on their way to work are shown stripped naked themselves, any offence caused by her work exposing our own hypocrisy.

Here are the titles and dates of the works we have chosen to represent Caroline Coon’s extensive output: