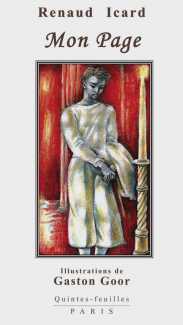 Renaud Icard (1886–1971) became an important friend and colleague to Gaston Goor after Goor moved to Hyères in 1933. Renaud first studied law, but turned to art and literature between the wars. In 1930 he opened an art gallery in Lyon, L’Art Français, and became an antiques dealer. He was friends with many writers including Henry de Montherlant, Antonin Artaud, Juliette Adam, Max Jacob, Roger Martin du Gard, Jules Supervielle, Francis Carco, Paul Claudel, Jacques Copeau, Charles Dullin, Jean Paulhan, André Gide and Jean Cocteau. Icard had became a member of the Lyon bourgeoisie through his marriage to Marguerite Chaîne, and with Marguerite had four children, but his later proven sexual orientation earned him the opprobrium of his fellow citizens, including his in-laws. His grandson and executor, Jean-Loup Salètes, made public Icard’s correspondence and personal photographs, demonstrating his double life and his lifelong attraction to boys.

The autobiographical novel Mon page (My Page) was written in 1918, and includes many references to friendships with other boys. There were plans for its publication in 1920, but Icard considered that some of the commissioned illustrations from the artist Auguste Roubille (1872–1955) were so anodyne that the book was never published in his lifetime. Gaston Goor, who shared Icard’s sensibilities and was encouraged in his homoerotic art by the gallery owner, took up the torch in 1955, and produced 44 pencil illustrations, 32 of which survived and are included in the edition of Mon page that was published by Quintes-feuilles in 2009.

The posthumous edition of Mon page includes a foreword by Yvon Taillandier and a preface by Jean-Loup Salètes.