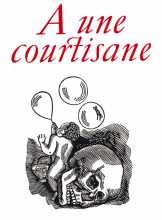 According to the pioneering libertine French poet Charles Baudelaire, love represents the end of innocence; he famously wrote ‘The unique and supreme delight of love lies in the certainty of being bad’ (‘La volupté unique et suprême de l’amour gît dans la certitude de faire le mal’). ‘Mal’ is a notoriously difficult French word to translate, with its multiple implications of evil, naughtiness, illness, poverty, guilt, and simply getting things wrong, so is a perfect catch-all for anything classified as morally dubious.

Pierre Durand was the arch-malefactor of 1920s and 30s Paris, using every ruse in the book to write and publish clandestine ‘forbidden’ material. He published under a range of pseudonyms, the best known being Pascal Pia, but he could also be Marcella La Plompe, Leger Alype or Pascal Rose. He could also be ‘Guillaume Apollinaire’, ‘Arthur Rimbaud’, or – as here – ‘Charles Baudelaire’. Given Baudelaire’s philosophy of love, it is unsurprising that Durand chose Baudelaire as the so-called writer of these poems praising the physical attributes of a favourite courtesan.

Tavy Notton’s explicit and powerful engravings are far from safe and pretty; the interplay of naked bodies is strong, energetic, dramatic. Here are lovers truly meeting one another.