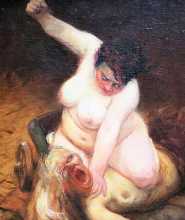 Jean Veber’s paintings echo and develop many of the themes of his drawings and lithographs, revealing him as a critical observer of social bigotry and insincerity. As well as being a talented painter, he had the imagination to create thought-provoking images such as the butcher with his display of human skulls and carcasses, a female Gulliver straddling a rural landscape, and ‘Dynamis’, who sits astride the machine spewing half-naked humans.

After his death the bulk of his work was sold at auction in 1936 and 1938, and very little is to be found in public galleries, which means that his paintings are less well known than they deserve to be.