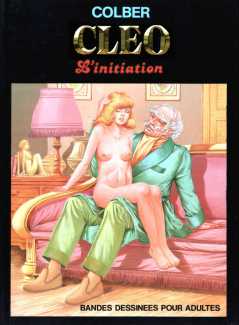 The Cléo series, which runs to six hardback volumes including a final volume set in Thailand, was in many ways already very dated in the mid-1990s when the final pages appeared. Cléo is just twelve when the series starts, watching her parents’ sexual exploits through the keyhole. Over time her initiation continues with encounters both male and female, including compulsory nuns, a boss who knows nothing about me-too, and various suspicious orientals. Like Nado, Cléo appeared under Hugues’ Colber pseudonym. The drawing style is more confident than his earlier work, daring to be bolder and spill over the edges of the frames.

Here we have the beginning of the first volume in English; you will find four of the six Cléo violumes in English here.