When the two illustrated volumes of Nous deux, a fictional amorous correspondence between student Nelly and her teacher Jean, appeared in 1929, they included no indication as to who had written it, who had illustrated it, and where and when it had been published – just a tantalising line saying ‘Gravé et imprimé pour les auteurs et leurs amis’ (created and printed for the authors and their friends). This was a time when short-run illustrated erotica was in high demand and many small-time entrepreneurs were all too ready to supply the market, but Nous deux was different from most, well-written and amusing, beautifully illustrated, and printed to a high standard. As Jean-Pierre Dutel, the cataloguer par excellence of erotic literature of the period, writes: ‘This edition was the most beautiful of the clandestine publications of the period, highly priced and highly prized.’ 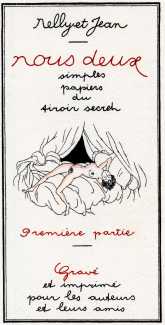 Though both author and illustrator were unmentioned, it quickly became clear among those in the know that the author was art critic and ceramics expert Marcel Valotaire, and the illustrator the talented young artist Jean Dulac; the two had probably met at Paul Landowski’s sculpture studio. At the time Valotaire was working with publisher Jack Kahane of the Obelisk Press on a study of French book illustration, so finding an exciting new artist to work with may well have been instrumental in the creation of Nous deux.

Written in the form of letters and diary entries, Nous deux follows the growing sexual attraction between young Nelly and her almost-as-equally-young Latin teacher Jean, and is written in a direct and entirely believable style which is in many ways just as approachable now as it was in 1920s Paris. Jean Dulac’s simple, delicately-coloured and beautifully understated images are the perfect complement to the text, explicit without being exploitative, showing how lovers as equals can learn to enjoy one another.

The style of the drawings owes a clear debt to the early work of Sylvain Sauvage, especially to Sauvage’s 1920 Une aventure de Casanova, which you can see here.