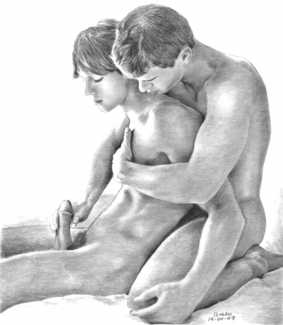 When Areko Martiánez’s third regular blog was shut down in late 2010 in a Google purge of more than 500 gay blogs, he was much missed by his many thousands of followers. One took to the format themself, writing on the fuckart blogspot in August 2010 an article titled La censura no sabe de arte es inculta (Censorship which doesn’t know about art is illiterate).

Here is a paraphrase of that piece (the original is in Spanish):

Disturbing, offensive, insulting, provocative – adjectives justifying the censorship of which Areko Martiánez has been a victim. They have now removed three of his blogs, using ‘paedophilia’ as an excuse. The admirers and followers of this Mexican artist know that he is worlds away from being such a perpetrator. Who is this anonymous censor who deletes blogs without notice? What are the criteria to determine what is ‘offensive’? Martiánez has always been a courageous chronicler of these stormy times, promoting the need for freedom of the body, a sexual freedom that has been so long oppressed.
I met Areko two years ago through another blogger friend, and fell in love with his humanity in drawing the sexuality we breathe day by day, together with his immense love for his partner and muse Locky. Fourteen years as a couple is not to be taken lightly, even today when sexual liberation creeps day by day towards a more open society.
What is Areko’s art? His drawings are sensitive, tender, reminding us of our varied experiences as well as the beauty of male bodies and genitals.
What am I going to do without you, Areko? What is my lust that fed on your drawings going to do now? What will my body do without your pencil? Your imagination has been censored, your hand that gives permission to all the men who, hidden between their sheets, need the images that leads to the necessary satisfaction of the body.
You have been censored, eliminated, victimised, but no doubt you will also prove to be a fighter who will return to impose his art, to scream with his pencil to show the beautiful strong bodies of Mexicans who, like you, intertwine their legs and sexes, humanising our necessary freedom. I hope you will be back with us very soon.