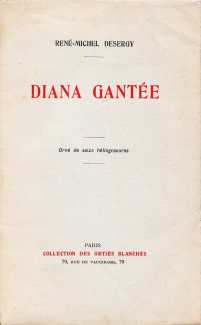 This addition to Jean Fort’s Collection des Orties Blanches (The White Nettle Collection), written by the prolific author René-Michel Desergy (under his own name for a change), recounts the experiences of a group of trainee young women learning the flagellation proclivities of some of the clientele of the establishment run by the glove-wearing Madame Diana, or Diana gantée.

Diana gantée achieved the notable distinction of being banned eight times by the Paris Criminal Court between 1950 and 1954, twenty years after it was published when there would have been a negligible number of copies still available.