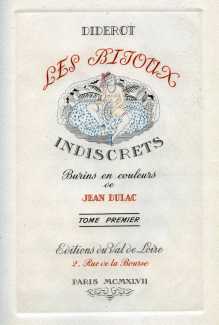 The story of how Denis Diderot, the celebrated eighteenth century French encyclopedist, managed to charm King Louis XV’s chief mistress with a keenly satirical novel which blatantly extolled the glories of her feminine parts, and thus kept himself out of a prison cell when many believed he should suffer for his radical views, is just the beginning of understanding Les bijoux indiscrets (The Indiscreet Jewels).

The allegory, Diderot’s first and most approachable novel, depicts Louis XV as Sultan Mangogul of Congo (a North African reflection of French court society, not the real Congo), and Madame Pompadour as the sultan’s favourite concubine Mirzoza. Mangogul receives from the genie Cucufa a magic ring by means of which he can hear what the women around him are saying, even though their lips remain sealed.
‘From whence,’ cried Mangogul, ‘shall they then speak?’
‘From the most sincere part of them, and the best instructed in the things you desire to know,’ said Cucufa, ‘from their jewels.’
‘From their jewels,’repeated the sultan, breaking into laughter, ‘this is something new. Talking jewels! How preposterous!’

Diderot’s wonderful novel, which explores power, gender, secrets, lies, and the enormous variety of sexual dalliance, remains uncannily meaningful and entertaining two hundred and fifty years after it was first published in 1748.

The two-volume Dulac-illustrated edition of Les bijoux indiscrets was published by Editions du Val de Loire, Paris, in a numbered limited edition of 318 copies, of which 298 were for general sale.

An excellent translation by Sophie Hawkes of Les bijoux indiscrets has been published as The Indiscreet Jewels by Marsilio Classics. This edition also includes a comprehensive historical and literary introduction to the work and its author by Aram Vartanian.