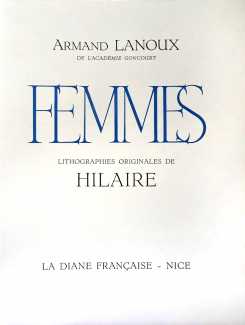 The 1972 portfolio Femmes is the only publication of Camille Hilaire’s to focus solely on the the female naked body, and the thirteen large colourful lithographs demonstrate his bold post-cubist style to best advantage.

The text for Femmes is by Armand Lanoux (1913–1983), a French writer, editor and broadcaster who in 1963 won the prestigious Prix Goncourt for his novel Quand la mer se retire (When the Tide Goes Out). From 1957 to 1964 Lanoux spent several months each year in Saint Jean Cap Ferrat, a peninsula east of Nice on the Mediterranean coast, and the short stories – and Hilaire’s images – capture something of the strong Mediterranean light.

Femmes was published by Édition La Diane Française, Nice, in an edition of 195 signed and numbered copies.